2011 Ford F-150 XLT 4x4, 5.0L V8, Crew Cab, XLT Chrome Package, AM FM CD MP3, Bluetooth Connectivity, Steering Wheel Mounted Controls, Power Windows; Seat and Locks, Power Adjustable Pedals, Remote Keyless Entry, 18" Chrome Wheels, Tow Package, Running Boards, Fog Lamps. Mullinax Bronze vehicles give you the assurance of a 5 DAY/300-Mile RETURN POLICY, if you don't like it, BRING IT BACK! At Mullinax, there are NO DEALER FEES! That saves you over $1,000 vs. Our largest competitors every day! Just add tax! Mullinax has 4,000 vehicles to choose from!

The latter of the four engines--the EcoBoost turbo V6--is the star of the lineup-- it produces V8 levels of power, but with V6 fuel efficiency. Peak torque for the EcoBoost V6 is 420 pound-feet that starts as low as 1,700 rpm and models with this engine are rated at a best-in-class 11,300 pounds and a best-in-class payload of 3,060. What's more, this engine, which Ford will be promoting as an alternative to step-up V8 models from competitors, runs just fine on regular unleaded gas.

Both the new 3.7L V6 and 5.0L V8 engines incorporate Ti-VCT variable valve timing, which harnesses oil pressure, directed with electronically controlled solenoids, to quickly change engine timing as needed for more power or better fuel economy. As a result, they produce impressive power and torque while also posting fuel economy improvements over the engines they replace. The base V6 returns EPA ratings of up to 16 mpg city, 23 highway, while the 5.0L 'Coyote' V8 is rated at 15 city/21 highway. The 6.2L V8--still the likely choice for those who have to tow heavy loads for long distances--gets 12/17 mpg.

F-150 trucks are purchased for such a mind-bogglingly wide range of uses, ranging from simple construction work to weekend haulers to cowboy commuters and those who use their rigs as a family vehicle, so Ford offers a very wide range of cab, bed, and trim levels to fit almost everyone.

Ford's SYNC interface is available throughout the lineup; the feature allows an easy Bluetooth-based, voice-command-driven interface with phones and smartphones, and allows other features such as traffic reports, news, and weather. For those who truly work out of their trucks, Ford is again offering a Ford Work Solutions in-dash computer with, among several noteworthy features, a tracking system for tools.

The F-150 lineup now includes ten different models, including XL, STX, XLT, XLT Custom, FX2/FX4, Lariat, Lariat Limited, King Ranch, Platinum and Harley Davidson F-150. Base XL models have vinyl seats, manual windows and wind-up windows, but they do include air conditioning and an AM/FM stereo. The STX adds keyless entry, cruise control and power accessories, while the XLT gets a little more of a dress-up, with fog lamps, a chrome grille and upgraded wheels. On the XLT, you can option up to the V8, but the Lariat includes it, along with some of the features of a luxury vehicle, including power-adjustable pedals, leather upholstery, SYNC and Sirius Satellite Radio. Lariat Limited and Platinum models add even more luxury, including remote start, power seats, ventilated seats, and wood and leather trim. The Lariat Limited also gets huge 22-inch wheels. Harley-Davidson and King Ranch models put it over the top in luxury, with a moonroof, heated second-row seats, a navigation system and special badging. The Harley Davidson model of course bows to its motorcycle namesake in appearance, while the King Ranch's interior is swaddled in top-caliber hides.

If you want a truck that's equipped more for sport, you should go for the FX2/FX4 models, which include a power driver's seat, SYNC, telescopic steering adjustment, blacked-out trim, 18-inch off-road wheels, and a power inverter. There's also a separate, even more intense off-road machine: the F-150 Raptor--featuring the 411-hp, 6.2L V8 plus a long-travel off-road suspension, skid plates, wide fenders and special electronic off-road controls.

Model Strengths
Smooth, Strong New Powertrain Lineup
Fuel Efficiency
Class-leading Towing And Payload Capacities
Wide Range Of Models For All Budgets, Tastes, And Needs
Available Luxury Features
Model Changes
The Ford F-150 has an all-new roster of engines for 2011, including Ford's first-ever turbocharged. The entire engine lineup is now mated to 6-speed automatic transmissions. The EcoBoost V6 is also one for the history books--a turbocharged V6 that claims to provide V8 power and torque with V6 fuel economy, while still maintaining truck-duty standards of durability. The already extensive lineup of F-150 models has also been expanded to include Lariat Limited and XLT Custom models. Newly available on some F-150 trims is a message center that includes a 4.2-inch display screen that shows trip computer functions, towing performance and off-roading information. The system also includes a higher-resolution rearview camera display.
The middle passenger in the back seat now gets a shoulder belt and head restraint; express up/down front windows are included, a 110-volt outlet, remote start, a telescopic steering wheel, HD radio and a perimeter alarm are newly available.
Model Value
Ford claims class-leading fuel economy, as well as best-in-class towing and horsepower for both its base V6 engine as well as both of the available V8s. Ford also says that it's the only automaker to offer a 6-speed automatic transmission across its entire model lineup. The F-150 is also the only full-size pickup so far to offer electric power steering, which saves fuel and gives an improved steering feel. 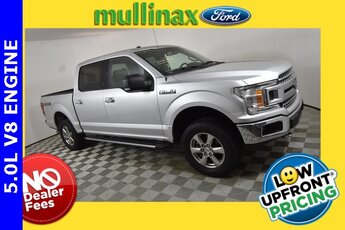 2015 Ford F-150 XLT
Silver
* Pricing - All vehicle pricing shown is assumed to be correct and accurate. Incentives, credit restrictions, qualifying programs, residency, and fees may raise, lower, or otherwise augment monthly payments. Additionally, incentives offered by the manufacturer are subject to change and may fluctuate or differ based on region and other considerations. Unless otherwise noted or specified, pricing shown does not include title, registration, or tax fees and costs. Price subject to change.