**FREE DELIVERY WITHIN 200 MILES IN FLORIDA**, **NO DEALER FEES**, **4.6 STAR CUSTOMER RATED DEALERSHIP**. Priced below KBB Fair Purchase Price! $3,095 off MSRP! Blue 2023 Ford F-150 XL 2.7L V6 EcoBoost At Mullinax Ford we offer customers Upfront pricing and NEVER charge a Dealer Fee. You'll always get the best price instantly, because it's right there on the windshield of your chosen vehicle. There's no hassle, and our Upfront® pricing is completely transparent. At some dealers, you'll hear about add-on fees like Dealer Fees, service fees, prep fees, administrative fees and handling fees. There's none of that at Mullinax Ford of Central Florida. Instead, we save our clients as much as $900 that they'd be forced to spend elsewhere. We also offer you comprehensive six-store advantage. What does that mean? Between all of our dealerships, you have thousands of vehicles to choose from, and we have the largest inventory of new Ford models in Central Florida. If you want a new Ford, there's only one place to shop in Central Florida -- Mullinax Ford. We want to make sure you’re completely satisfied with your experience at Mullinax Ford.

Trims include XL, XLT, Lariat, King Ranch, Platinum and Limited. The basic XL trim is available with three different cab sizes and three different bed lengths in either 2WD or 4WD configurations. Owing to its work-truck pretensions, the XL is relatively light on bells and whistles, with just basic utilities like an AM/FM radio and a 4-inch screen in the center stack.

To celebrate the 75th birthday of the F-Series, Ford is launching a special Heritage Edition which is based on the XLT trim. Recall the F-150 of the 1970s and 1980s with the New Heritage Edition and its two-tone exterior paint. Available paint options include Race Red/Carbonized Gray, Atlas Blue/Agate Black, Antimatter Blue/Carbonized Gray, Avalanche/Agate Black, and Area 51 (grayish blue)/Agate Black. Inside, look for a gray and black color scheme, unique seat trim, and Heritage badging on the console lid.

The new 2023 F-150 Rattler offers a more affordable off-roader. Based off the lower-cost XL trim, standard 4WD and some of the offerings from the FX4 off-road package, including off-road shock absorbers, electronic rear-locking differential, hill descent control, special skid plates and good-looking all-terrain tires. The F-150 Rattler comes with onyx seats and bronze accents inside the interior. Rattlesnake graphics and a dual-exhaust system on the outside, so it won't be hard to miss rolling down the streets or should I say down trails. Exterior color include Oxford White, Avalanche, Iconic Silver, Carbonized Gray, Antimatter Blue, Stone Gray, Agate Black, and Rapid Red TriCoat.

The Tremor model offers loads of off-road specific features such as upgraded suspension for better ground clearance and softer dampening. It also comes with many drivetrain features such as locking differentials and reinforced front hub knuckles, as well as other exterior elements such as off-road running boards, upgraded bash plates, high-flow exhaust, and unique front fascia.

The Platinum version is the urban cousin to the King Ranch trim. Like the King Ranch, it's only available with a crew cab and the V8. It also features a voice-activated navigation system, unique 20-inch polished aluminum wheels, LED side mirror spotlights, power deployable running boards, aluminum interior trim and a leather wrapped and heated steering wheel. 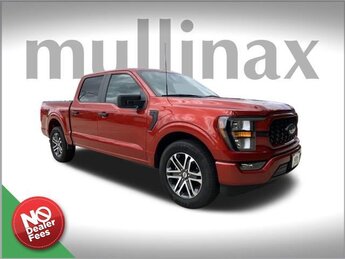 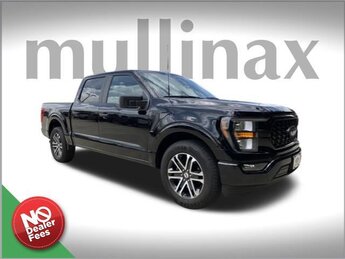 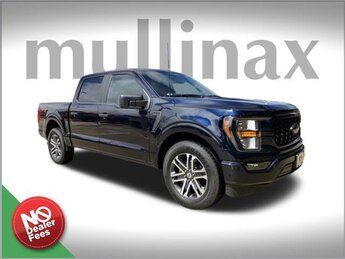 2023 Ford F-150 XL
Blue
$47,030
* Pricing - All vehicle pricing shown is assumed to be correct and accurate. Incentives, credit restrictions, qualifying programs, residency, and fees may raise, lower, or otherwise augment monthly payments. Additionally, incentives offered by the manufacturer are subject to change and may fluctuate or differ based on region and other considerations. Unless otherwise noted or specified, pricing shown does not include title, registration, or tax fees and costs. Price subject to change.